The Ideal Control Centre
With its elegant touch panel display, the CP1 is stylish and easy to use. The CP1 features a 4.3” colour TFT LCD full colour display, with capacitive touch. All features of the CP1 are controlled by this touch display which eliminates any front panel mechanical potentiometers and switches.

Unlike its mechanical counterpart, an electronic touch display also has the advantage of allowing the shortest possible signal path from inputs to outputs, thus ensuring the integrity of the audio signal. An additional remote control also performs the same functions of the touch display, including input switching, volume control, mute and standby modes.

Ideal Switching
Input and output signals are made through the highest quality silver-plated oxygen free copper (OFHC) RCA connectors. Input selection is made with high quality gold plated Swiss made relays, and only the selected input is connected - all other inputs are isolated. The selected input is followed by a buffer amplifier and presents a benign load to signal sources.

Dual Mono Layout
Audio purity is maximised by using minimal components in the signal path. Moreover, crosstalk is virtually eliminated by using a dual mono layout for left and right channels. Once again, only low-noise and zero-induction resistors are used.

Block Diagram of the CP1

What is a Single-Ended Interconnection?

We are all familiar with the ubiquitous RCA (phono) connectors that have been fitted to hi-fi equipment for decades without any significant problems. This method of connection is often termed “single-ended” or unbalanced. Single-ended interconnections are a simple and common way of transmitting an electrical signal from a source component to a following component. The electrical signal is transmitted by a voltage (a varying voltage that represents the music being played), which is referenced to a fixed common reference potential. The fixed potential is usually a zero voltage node and is commonly referred to as “ground.” One conductor carries the signal and one conductor carries the common reference potential or ground. The current associated with the signal travels from source component to the following component and returns to the power supply through the ground connection. This type of connection has the virtue of simplicity. A simple output stage is needed in the source component and a simple input stage in the receiving component. 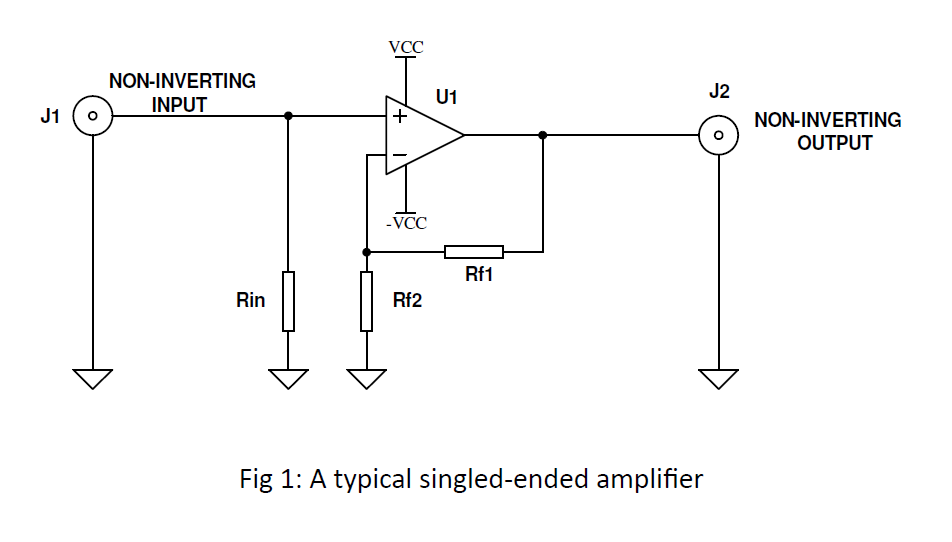 What is a Balanced Interconnection?

Many of us do not know what balanced operation actually is, other than that it involves a different kind of signal connector. Balanced interconnections were originally conceived for use in professional audio where long cable runs and noise is a problem. In a home environment however, short cables are generally used and the environment is considered to be quiet. Balanced interconnections employ two ideally complementary voltage signals in order to transmit one music signal. One music signal requires a pair of conductors; one carries the signal and the other carries the inverted signal. There are two main types of balanced interconnections: transformer balanced and electronic balanced. 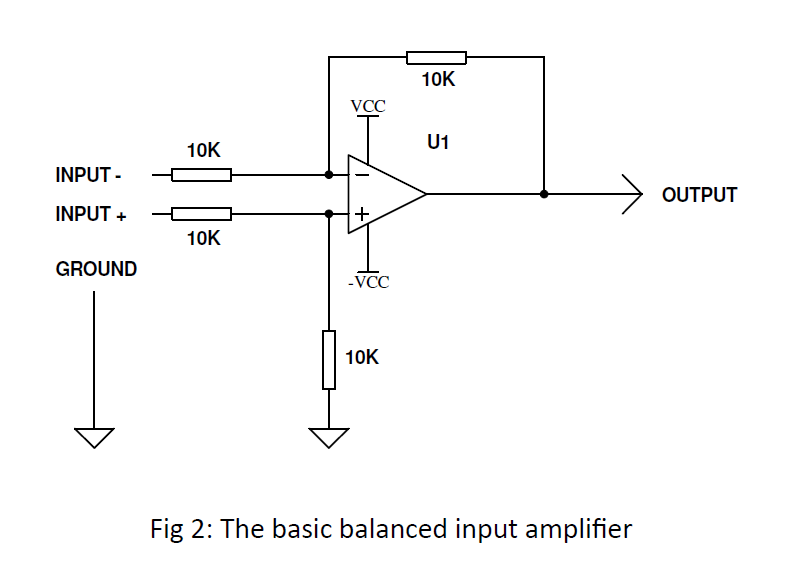 As Douglas Self outlines in his text, Small Signal Audio Design [1], transformer balancing performs well in very hostile radio frequency (RF) and electromagnetic compatibility environments (EMC). This is because transformers are electrically bullet-proof and retain their high Common-Mode Rejection Ratio (CMRR) performance. On the down side however, transformers generate low frequency distortion. They are likely to have high frequency response problems due to leakage reactance and distributed capacitance. Inevitably they are also heavy and expensive. Transformer balancing is relatively rare in hi-end audio and consequently electronic balancing will be the focus here.

With electronic balancing, a following component extracts information by detecting the potential difference (by means of subtraction) between the inverted and non-inverted signals. The two voltage signals are “balanced,” meaning that they have equal amplitude and opposite polarity relative to a common-mode voltage. The return currents associated with these voltages are also balanced and thus cancel each other out. For this reason, we can say that complementary voltage signals have (ideally) zero current flowing through the ground connection. In real life however, the subtraction falls short of perfection, as the gains via the inverted and non-inverted inputs will not be precisely the same, and the degree of discrimination actually achieved is called the common-mode rejection ratio. Compared to transformer balancing, electronic balancing has the advantages of low cost, smaller size and weight, superior frequency and transient response. We will now discuss the advantages and disadvantages of balanced interconnections, as outlined by Douglas Self in Small Signal Audio Design [2].

Proviso
For high CMRR, it is essential to have as closely matched resistors and the lowest possible amplifier output impedances and the highest possible amplifier input impedances to get the maximum common-mode rejection. This is highly convenient because low output impedances are already needed to drive cable capacitance and inputs, and high input impedances are needed to minimise loading of the driving amplifier. However, we don’t live in a perfect world. Resistors are never exactly matched with each other. They are usually manufactured in tolerances of 10%, 5%, 1% and even 0.1% at great expense. Similar tolerances apply to operational amplifiers and discreet amplifiers which also have an effect on CMRR. In theory, the CMRR of a balanced amplifier is infinite. The CMRR of circuit in Fig 2 drops to 80dB when using resistances of 1% tolerance. Increasing the ratio of input impedance to output impedance will increase the CMRR but only at the expense of an increase in Johnson noise. [3]

2. Balanced connections make ground-loops much less intrusive, and usually inaudible.
3. A balanced interconnection incorporating a true balanced output gives 6 dB more signal level on the line, which should give 6 dB more dynamic range.
However, this is true only with respect to external noise. A standard balanced input using 10 kΩ resistors is about 14.2 dB noisier than a standard unbalanced input. [4]
4. Balanced connections have the advantage over many RCA connections in that when connected with the system active they do not produce any dangerously loud noise which may be very harmful to both the electronics and loudspeakers.

The ideal balanced amplifier senses the voltage difference between the inverted and non-inverted inputs and ignores any common-mode voltage which is present on both – usually in the form of external noise and crosstalk. The amount by which it discriminates is called the common-mode rejection ratio or CMRR, and is usually measured in dB (decibels).

2. Standard balanced amplifiers can suffer from an impedance mismatch which may result in a difference in fidelity between each output.
Another issue with a standard balanced amplifier is that the input impedances are not equal when it is driven from a balanced output. For the circuit shown in Fig 2, the input impedance of the non-inverting input is 20kΩ and the input impedance of the inverting input is 6.66kΩ. Due to negative feedback, the non-inverting input is being driven simultaneously with a signal of the opposite phase, so that the inverting opamp input is moving in the opposite direction to the inverting input. This effectively reduces the value of the 10 kΩ resistor to 6.66 kΩ. Whilst this does not compromise the CMRR, it does produce an impedance mismatch, as seen by the source component, between the inverted and non-inverted inputs, as seen by the signal. Depending on the design of the source component, such an impedance mismatch may result in a difference in fidelity between each output. [6]

3. More hardware means more cost.
Small-signal electronics is relatively inexpensive. Unless you are using a sophisticated low-noise input stage, most of the extra cost is likely to be in the balanced input connectors.

4. Balanced connections do not of themselves provide any greater RF immunity than an unbalanced input. For this to happen, both legs of the balanced input would have to demodulate the RF in equal measure for common-mode cancellation to occur. This is highly unlikely, and the chances of it happening over a wide frequency range are zero. It remains vital to provide the usual passive RF filtering in front of any electronics to avoid EMC troubles.

5. There is the possibility of introducing a phase error.
It is all too easy to create an unwanted phase inversion by confusing non-inverted and inverted when wiring up a connector, and this can go undiscovered for some time. The standard European wiring of balanced connectors were, for a long time, out of phase compared with the standard connections used in the USA. On an unbalanced system, the audio is completely muted and leaves no room for doubt.

6. Implementation of Balanced Circuits
Many hi-fi balanced components are, in fact, single-ended inside with messy, potentially sound compromising amplifiers/ buffers at the inputs and outputs. Some components have more amplification stages in the inverted line than in the non- inverted. This creates phase differences and reduces CMRR. For marketing purposes, many manufacturers simply “bolt on” a phase inverter stage fed from the main, non-inverted output. This provides a phase inverted output for compatibility, but sacrifices fidelity in the process. Very few products are truly balanced from input to output. They are more costly to manufacture as, at the very least, double the amplifying stages are required as well as double the number of volume controls, selector switches etc. It is also a requirement that each channel is as closely matched as possible for sonic purity.

The specifications of a power amplifier are not the whole story of its sonic characterisitics. Only a holistic approach taking into account the real load of a loudspeaker can lead to the best sound reproduction. The ideal amplifier operates without level and phaseshift across any load.

The UF1 is the ideal power amplifier and complement to the CP1 pre-amplifier. Thanks to its unique technology, using the latest cutting edge bipolar transistors, the UF1 offers superb sound characteristics as well as incredible power and performance; a standard which is unsurpassed even by much more expensive amplifiers. Using a stable power supply, the UF1 is designed to accurately process relatively large signals to deliver current capacity and maintain performance, independent of the load presented by the loudspeakers.

The UF1 is extremely fast with ultra-wide bandwidth and has a high current capability. An amplifier must be able to cope gracefully with impedence dips to 4 Ohms and lower. As the load impedence of an amplifier is decreased to below 8 Ohms large signal non-linearities begin to appear. Unlike, crossover distortion, this large signal non-linearity is significantly dependent on the amplifier's output stage power transistors.

The Open Audio Designs UF1 utilizes the latest in transistor technology to deal with these significant distortions. The transistors used in the UF1 are in a different class from the more conventional transistors, in that, the current gain is completely maintained over its full power bandwidth. Correct utilization of these transistors minimizes not only the large signal non-linearities but significantly lowers crossover distortion.